Porcelain, gold leaves on a cement and steel base

JAMES WEBSTER (born Suffolk, 1978) received classical training in sculpture in Florence, Italy, where he worked as an apprentice to Marianne Luchetti. Upon his return to the UK, he marked a detachment from these classical roots with the inauguration of his first solo exhibition of contemporary sculpture at the Rivington Gallery (London) in 2008. A desire to plunge even further into anatomy, his passion, drove him to then return to the countryside of Suffolk, Webster’s native region, where he would spend long months isolated in his studio, studying his subjects and not only striving to master the various techniques of ceramics but to also further push the boundaries of his art.

TROPHIES consists of eight porcelain animal skulls and vertebrae, ceremonially placed on concrete cubes fixed in steel plate, organised in two rows of four sculptures facing another like the Avenue of Sphinx at the Egyptian temple in Karnak.

This is James Benjamin Webster’s first research in porcelain. Working in this ancient and revered material, JBW has developed a sense of real bone, a notion of the past through new objects of precious value. As a Victorian scientist would collect information and recreate their findings; JBW has worked from real animal skeletons through observation and memory.

The recent destruction of ancient icons and temples, along with our latent neglect of the environment, has become an integral discussion within JBW's work. He has attempted to build a new monument to represent our past and our future. Using ceramic instead of taxidermy, his working process strives to idolise the living as if they have passed already. He uses strong and vulnerable, precious and throwaway materials to derive a sense of archaeology Gold in the ancient world was the representation of the sun and its light. The skulls are all under the sun with the blue-grey shadows of the porcelain beneath. JBW's sense of ritual and ceremony and its obligations played heavily in the development of his work. This is not a sculpture about death but a story of life.

Educated at the Norwich School and trained as an artist in Florence, James Benjamin Webster (born Suffolk, 1978) grew up in Norfolk, with a childhood discovering and playing in the rich flora and fauna of the countryside and listening to the stories and mythology read to him by his grandfather 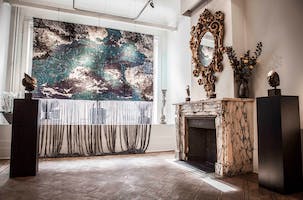